Just this morning, Bossvibe got a report from a student of the University of Nigeria, Nsukka Campus (UNN). She identify her name to be Alexa and a 100L student of Human Anatomy department.

READ: Importance Of Education – School Is Not A Scam! (See Why)

She reported to Bossvibe that just yesterday, 9th March (Tuesday), A female student was sexually man handled and a Male student was beaten. In her course of narranting what happened she said that the students were harrased and beaten by some pharmacy students that came into the pharmacy hall were the night class was going on and started pursuing students who were not students of Faculty of Pharmacology out of the night class hall. In the course of pursuing students that were not student of Pharmacy, A female pharmacy student who was identified to be called “Berry” who was among the pharmacy students that were pursuing other students, was said to be very rude and insensitive in some of her talks.
Below is a full detailed audio of Alexa who narrated the incident
Also, Bossvibe reached out to the female student to listen to her on side of the awful incident and she also poured out her anger and narrated the incident.
Below is her own words👇
Meanwhile, the faculty president of pharmacy, Comr. Ezugwu Paul this morning also on his WhatsApp status addressed and talked about the incident that happened in the night. On his WhatsApp status, he noted that Non-Pharmacy student should not be sent out of the pharmacy class rooms except if they turn to thorns I’m the flesh. He also appealed to Pharmacy students to treat one another as brothers and sisters.
Below is screenshot of his WhatsApp status👇 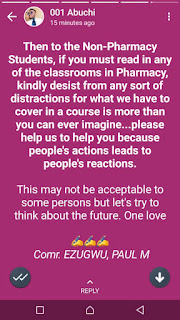 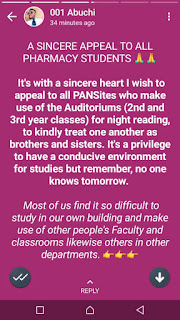 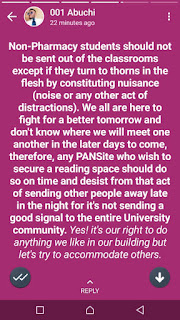 Below is the video of the awful night class incident 🤦👇, when the guy was beaten up
This incident is an awful incident is deservers to be looked into and rectifications made.
UNN Students Beaten By Some Pharmacy Students During Night Class (VIDEO)

We will begin a nationwide strike on Monday – ASUU